If you were to submerge an on object into a fluid forces will develop onto the surface of the object.  This is due to the pressure that is exerted on the object.  For this article will be looking at hydrostatic force on a plane.  Now why are we interested in hydrostatic force on a plane.  Well the reason why is to prevent objects like dams, storage tanks, and ships from failing.  It is also useful to determine the force required to open a gate that is controlling the water level of a reservoir.

When a fluid is at rest there will be no shearing stresses present within the fluid.  As a result the forces caused by the pressure will perpendicular to the surface.  In addition we know that the pressure caused by the fluid will change linearly in relation to the depth of the fluid.  Due this fact the resulting pressure fields will result on the walls of a container.

If the outside of the container is surrounded by atmospheric pressure then the pressure fields inside the container can be calculated using the following equation.

The above equation is a general equation on how to find the resultant force acting the side wall of a container.  On the other hand if you know where the centroid of the surface area and what the area is than you can simplify the above equation to the following.

$h_c$ =  vertical distance to the centroid from the fluid surface

Be aware that the magnitude of the force does not depend on the angle of the wall.  Instead it depends on the specific weight of the fluid, the total surface area of the wall, and how far the centroid is from the fluid surface.

The next thing that needs to be determine is at what point will the resultant force pass through the wall.  Intuition may tell you that it would be at the centroid of the area, however that is not the case.  Instead you will need to find the x coordinate ($x_R$) and y coordinate ($y_R$) by summing the moments around the y axis and the x axis. This is done by finding the area moment of inertia around the centroid.  The resulting equation for the x coordinate and y coordinate can be seen below. Area Moment of Inertia and Centroids of Common Shapes 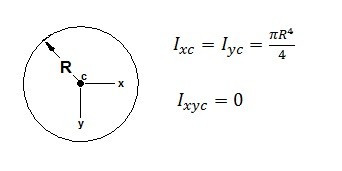