Potential energy represent the energy that particle already posses which could do work.  This could be do to the objects position, current stresses that are within the object, or possibly an electrical charge. 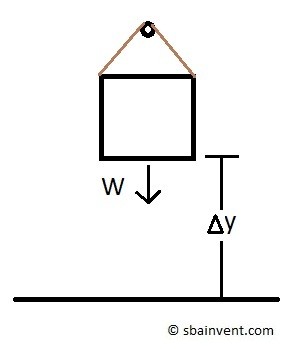 As seen in the image above as an object is hanging in space but has the potential to fall. It will have a potential energy that is the product of that objects weight and the distance the object is from the ground.

A weight with a mass of 50kg is being held 2.5m above the ground.  What amount of energy is stored in the object where the object has the potential to fall the full height and hit the ground? The variable k in equation 2 represents that spring constant, which represent the amount of deflection caused by a certain amount of force. Refer to equation 3.

A spring has a spring stiffness of 25$\frac{N}{mm}$. A force is deflecting the spring 20mm.  How much energy is being stored in the spring?

An particles kinetic energy is based off its velocity as well as its mass as seen in the equation below.