Property diagrams are used as graphical representation of a phase change for a pure substance.  There are three types of property diagrams that I am going to discuss.  They are the T-ν, P-ν, and P-T diagrams.

A T-ν diagram is a property diagram that relates temperature to specific volume when a pure substance is at a constant pressure.   Below is a graphical example of three different T-ν diagrams. These three T-ν diagrams represent how pressure will effect the phase change process.  First, on this graph you will notice a point called the critical point.  The critical point is defined as the point at which the saturated liquid and saturated vapor states are identical.  In turn,  this point is located where the critical pressure line $P_{cr}$, critical temperature$T_{cr}$, and critical specific volume $ν_{cr}$ intersect.

On the other hand, there are also cases where the pressure is greater than the critical pressure.  When this occurs there is no phase change line.  Instead only one phase of the pure substance is present. Basically, a liquid will eventually resemble a vapor.  However, we will not be able to tell when the change occurred. The next type of property diagram is called the P-ν diagram.  In this cause we are looking at pressure, P, vs the specific volume, ν, of a pure substance.  In turn, this property diagram is very similar to the T-ν diagram except instead of there being a constant pressure the temperature is constant.

From this diagram it can be seen that the temperature remains the same.  In order for this to occur the pure substance must exchange heat with its surrounding.  Finally, it can also be seen that as the pressure decreases the specific volume will increase.

Extended Diagrams to Include the Solid Phase

In addition, to showing the liquid and vapor phase, these diagrams can also show the solid phase and solid-liquid phase.  Depending on the if a substance contracts or expends when it freezes determines what the extended P-ν diagram will look like.   This first diagram below represents a substance that will contract when it freezes.  This is how most substance will behave. In these diagrams you may have noticed a line called the triple line.  The triple line represents a condition where all three phases, solid, liquid, and gas, coexist in equilibrium.  In turn, the states of a substance on the triple line will have the same temperatures and pressure but different specific volumes.

Finally, from these diagrams it can also be seen that a solid can pass directly into the vapor phase.  This is known as sublimation.

The final property diagram is called the P-T diagram.  For this we are looking pressure vs temperature.  This diagram is often referred to as the phase diagram.   In this diagram you will be able to see three different lines.  This line represent sublimation, melting, and vaporization.  Where these lines intersect is called the triple point.  The triple point is where all three phases coexist in equilibrium.  Below is an example of what a P-T diagram looks like. 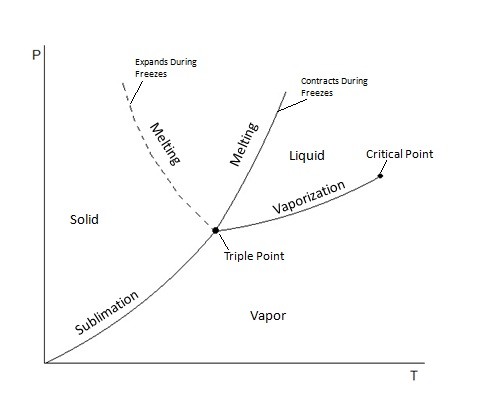